Don't get me wrong, I'm not saying that Ukraine should be on your top ten list of places you want to go, it's not the easiest place to navigate and not many people speak more than a few words of English. But if you just happen to end up there like I did (perhaps for the upcoming World Soccer Cup??), it's really quite interesting. (Lucky for me my brother has been living there and speaks the language, so I had my own tour guide and interpreter!) 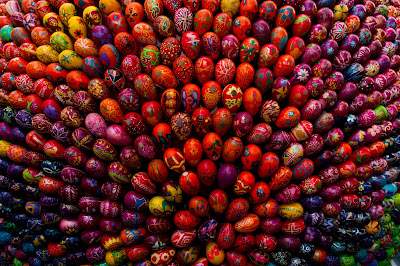 Kievo-Pecherska Lavra, which means monastery of the caves was founded in 1051 after orthodoxy became the official religion of Ukraine. The Lavra includes almost 70 acres and many beautiful buildings which over the years have been burned and destroyed many times but they always rebuilt them. Many of the buildings are now museums, including a "miniatures museum" where you have to view tiny models of things by microscope. 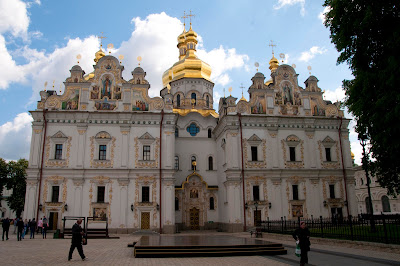 Beneath the beautiful golden domed buildings of the church are a series of caves which were built by the original monks, they studied, worshiped and lived there. When they died their bodies were naturally preserved by the cool temperature and dry air of the caves. These mummies are still there today in the caves in glass cases, mostly covered but a few of their hands come through the covering. We went down into the caves and by candlelight viewed these mummy holy men and watched as those who still worship them kissed the glass of their cases repeatedly while saying what I assume were prayers of some sort. Women must be modest and cover their heads, legs and shoulders to enter the caves. (Because it is considered holy you can't take pictures of the creepy mummy hands poking through otherwise I would have! But check out the awesome church...) 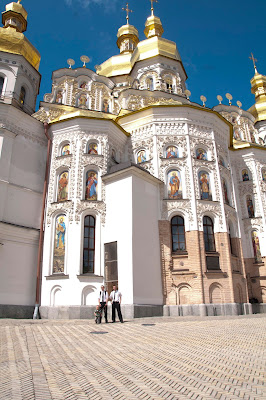 From the Lavra you can see Rodina Mat, translation: 'Nation's mother', she is a short 5 minute walk away. She was built in 1981 to honor Kiev's defenders during the 'great patriotic war' or WWII. She measures 203 ft from sword to foot. (The Statue of Liberty stands at 151 ft from torch to toes.) 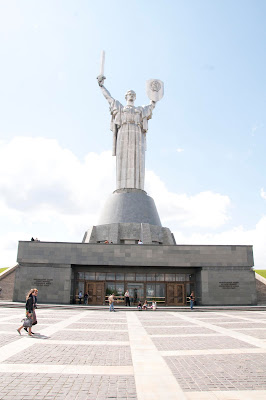 The building that Rodina Mat sits on is a WWII museum. There was some interesting stuff in there, everything was in Russian which made it a bit tough. The most disturbing thing I found in the museum was a pair of gloves made from...brace yourself, human skin. Gotta love those Nazis. 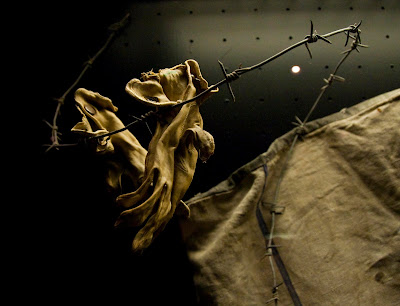 Russia and Ukraine have so much interesting history, I wish I knew more about all of it. But it was very interesting to be there and to feel some of the leftover effects from the Soviet Union.
Walking down Andriyivsky uzviz in the shadow of the awesome St. Andrew's church, there are TONS of little stands with every souvenir you could ever desire. It is on a cobblestone hill which winds its way down to the Dnipro river. As you get to the bottom of the hill, if you watch, there is a set up stairs you can go up for an awesome view of the city. 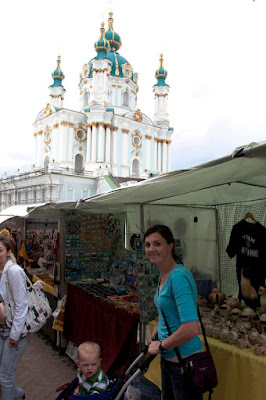 St. Sophia's Catherdral is Kiev's oldest standing church. It has a very pretty blue watch tower. I just love the architecture, it's like what you would picture in Moscow. 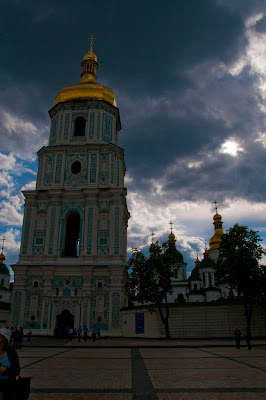 Speaking of architecture, here's a funny piece of work. You might have to click on this picture to see it bigger. This is the House of Chimaeras/Gorodetsky House. Legend has it the architect,

Vladislav Gorodetsky’s daughter committed suicide by jumping into a river. As a result, Gorodetsky went mad and built this gloomy house to commemorate his daughter. It's got all kinds of interesting statues on it. 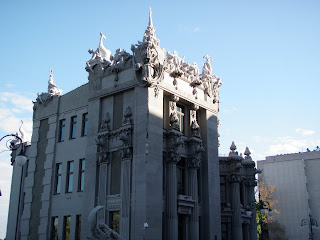 Friendship arch, commemorating the relationship between Ukraine and Russia. It even lights up in rainbow colors at night! 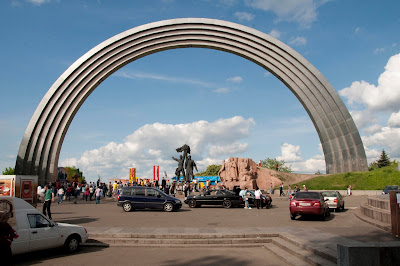 If you have time you must see the Pyrohovo Museum of Folk Architecture. It is an outdoor living museum of 17th-20th century wooden cottages and churches divided up into seven "villages" representing the areas of Ukraine (think Williamsburg, VA). There are cute old ladies wandering around reenacting what the village people might have done. 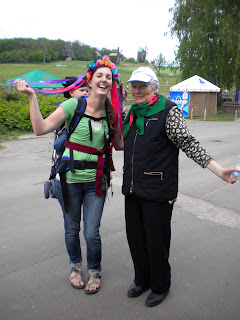 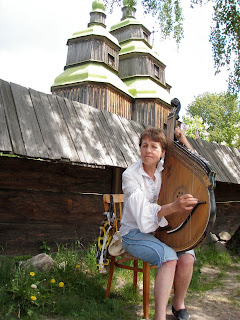 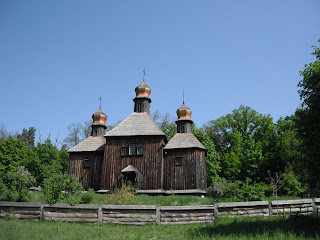 A few more notes on Ukraine, we rode the bus everywhere and they pack into those buses like nobody's business. When there is no standing room left, they grab the door and swing into the bus when it closes. Regardless of how full the buses were though, as soon as people saw me with a little one in my arms someone gave up their seat. Ukranians do not smile at each other so they can tend to look very intimidating, but despite their hard looks and blunt ways they are sooo helpful!
Posted by Jen at 8:00 AM