Near the border of Germany in the Alsace region of France, a little ways from Strasbourg, up on a beautiful hill is the natzweiler-struhof concentration camp.  This particular camp was where they sent the "criminals". Because these people were considered criminals (though many of there offenses were very small) they were medically experimented on. Some of the signs described the various experiments, it was very difficult to read. Throughout the camp they had large photos of very old men and women standing where the photos were placed, these photos were of survivors of this camp who came back to see it. Very moving. 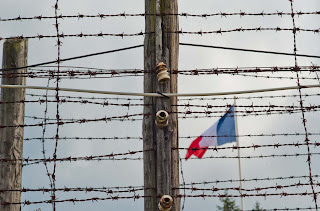 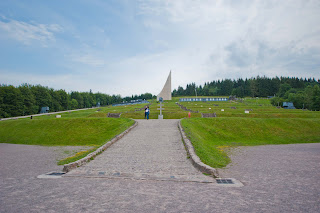 There were also two little museums you could go through, one was in an original bunkhouse and the other was below the ticket office down in this huge cave that they had built at the time of the camp, to this day no one knows what the cave/bunker was for, very strange. Only a mile or two from the camp there was a resort, it's a beautiful area. Can you believe that people were vacationing right there next to it? Do you think they knew? The whole thing is just so unreal, and it really wasn't that long ago.
Posted by Jen at 7:29 AM