If you want to get an idea of how far flung the Roman empire really was, check out Trier, Germany. It is a city of Roman ruins, all the way up in Germany! Trier is the oldest city in Germany, it dates before the Roman empire but was taken over by the Romans during their reign.

In Trier is the oldest cathedral in the country. The cool thing about it is that it was built and added onto over such a long period of time that pretty much every architectural style is represented. In one spot you can see an old Roman column peaking through a newer column. The church has a "relic" inside, in a big fancy display room in a beautiful box, supposedly is Christ's robes.

The emperor Constantine lived in Trier. You can see ruins of his bath houses and his "throne hall". Roman remains are everywhere! 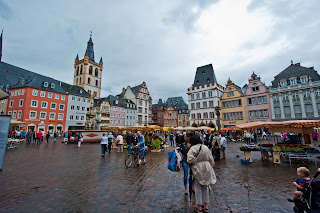 Trier felt a lot less "German" to me then some of the other towns I have seen in Germany. It actually felt a little like Italy to me. They had a market going on in the main square and everything was so beautiful. 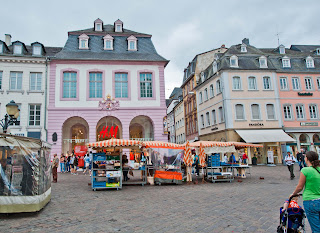 Another fun sight is Karl Marx's house. It is now a museum about him, we got there just as they were closing and it appeared that most everything in the displays was in German or Chinese. 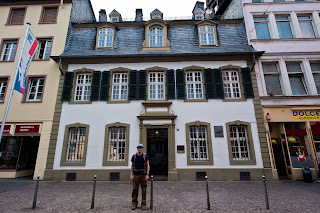