If you're looking to escape to the mountains there is no better place to do that then Switzerland. Everywhere you go in Switzerland there is a mountain, a lake, a river and a waterfall within sight. It is absolutely breathtaking. The city of Luzern is a wonderful place to see. The historic part of town is full of half timbered houses and even has a medieval wall with nine towers, three of which you can ascend (for free). The "chapel bridge" is Europe's oldest surviving wooden covered bridge built in 1333 with 17th century paintings in it depicting the history of Luzern. 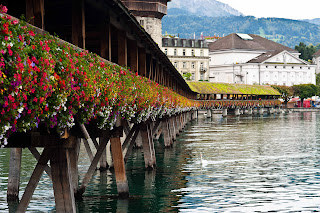 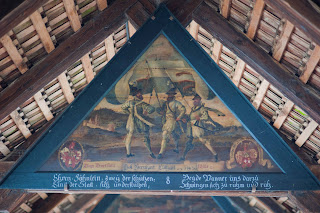 The dying lion monument commemorates the hundreds of Swiss Gueards who were massacred in 1792 during the French Revolution, when the mob stormed the Tuileries Palace in Paris.

Interesting fact for you...in an attempt to maintain neutrality Switzerland long ago strategically placed explosives around the borders that when activated, because of all the mountain passes would make access to Switzerland impossible by road. 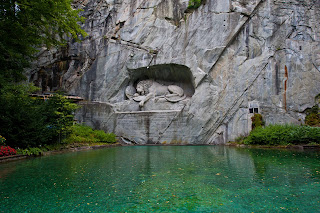 Next to Luzern are two major mountains, Mount Pilatus and Mount Rigi. They have a package deal that you can do where you take a boat ride to the base, ride a cogwheel up Mount Pilatus and then a Gondola back down but it's pretty pricey (80 Euro on the off season).
We decided to hike to the top to avoid paying for the cogwheel/gondola. We wanted to do the toboggan ride at the top which they claim is Switzerland's longest summer toboggan ride. This hike is not for the faint of heart. It starts at the bottom of the gondola in Kleine and takes 3 hours of straight up the mountain to get there.

Be warned, everything in Switzerland is EXPENSIVE. The hotels can run you about $200 a night. We roughed it in a tent at a campground and paid $50 a night to do it. I never thought I would pay that much to camp! But what better place to camp then beautiful Switzerland.
Posted by Jen at 10:02 AM